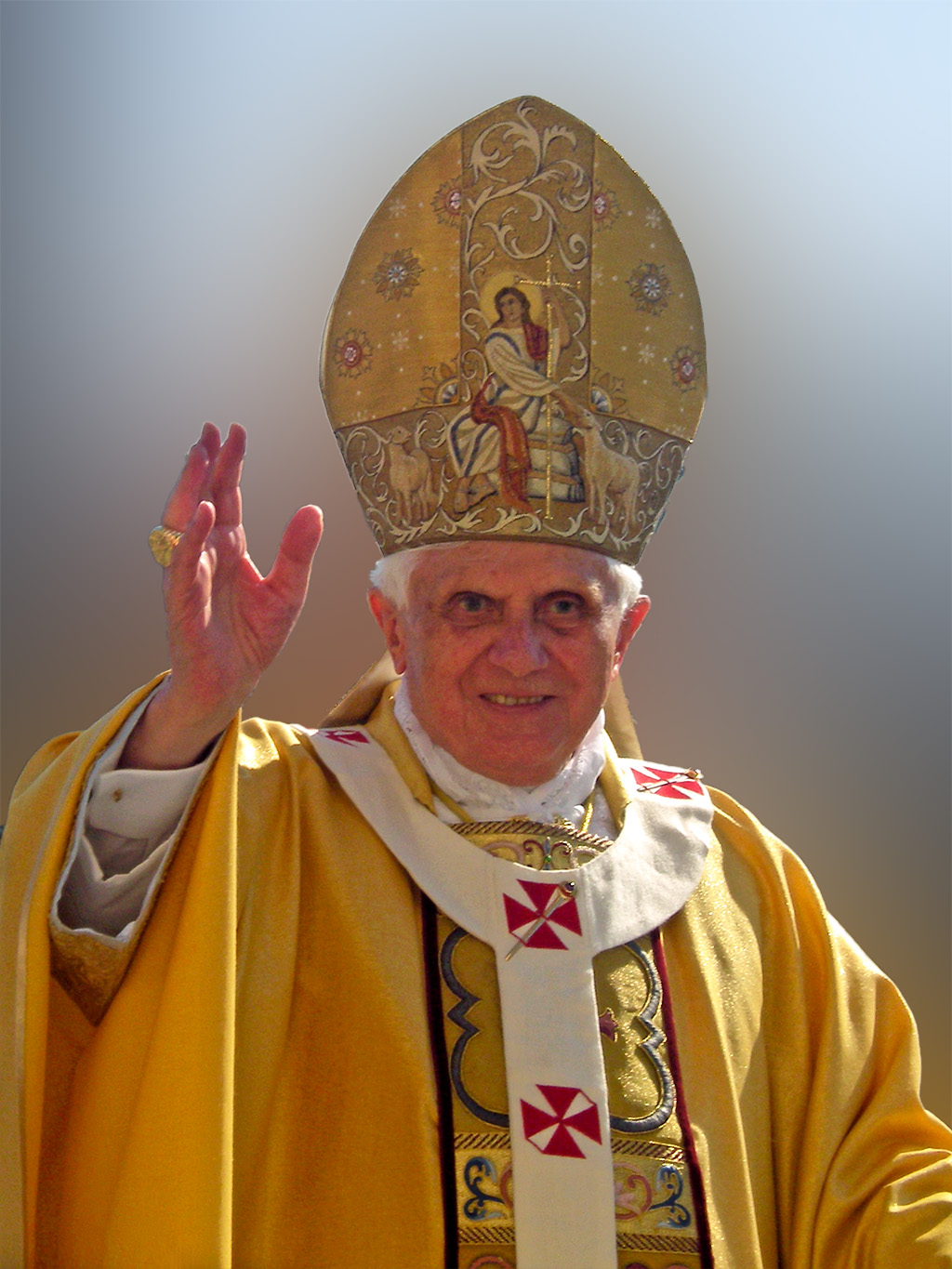 Pope Benedict XVI (; ; ; born Joseph Aloisius Ratzinger, , on 16 April 1927) is a retired prelate of the Catholic church who served as the head of the church and the sovereign of the Vatican city state from 2005 until his resignation in 2013. Benedict's election as pope occurred in the 2005 papal conclave that followed the death of Pope John Paul II. Benedict chose to be known by the title "pope emeritus" upon his resignation.

Ordained as a priest in 1951 in his native Bavaria, Ratzinger embarked on an academic career and established himself as a highly regarded theologian by the late 1950s. He was appointed a full professor in 1958 at the age of 31. After a long career as a professor of theology at several German universities, he was appointed Archbishop of Munich and Freising and created a cardinal by Pope Paul VI in 1977, an unusual promotion for someone with little pastoral experience. In 1981, he was appointed Prefect of the Congregation for the Doctrine of the Faith, one of the most important dicasteries of the Roman Curia. From 2002 until his election as pope, he was also Dean of the College of Cardinals. Prior to becoming pope, he was "a major figure on the Vatican stage for a quarter of a century"; he had an influence "second to none when it came to setting church priorities and directions" as one of John Paul II's closest confidants. He has lived in Rome since 1981.

His prolific writings generally defend traditional Catholic doctrine and values. He was originally a liberal theologian, but adopted conservative views after 1968. During his papacy, Benedict XVI advocated a return to fundamental Christian values to counter the increased secularisation of many Western countries. He views relativism's denial of objective truth, and the denial of moral truths in particular, as the central problem of the 21st century. He taught the importance of both the Catholic Church and an understanding of God's redemptive love. Benedict also revived a number of traditions, including elevating the Tridentine Mass to a more prominent position. He strengthened the relationship between the Catholic Church and art, promoted the use of Latin, and reintroduced traditional papal vestments, for which reason he was called "the pope of aesthetics". He has been described as "the main intellectual force in the Church" since the mid-1980s.

On 11 February 2013, Benedict unexpectedly announced his resignation in a speech in Latin before the cardinals, citing a "lack of strength of mind and body" due to his advanced age. His resignation became effective on 28 February 2013. He is the first pope to resign since Gregory XII in 1415, and the first to do so on his own initiative since Celestine V in 1294. As pope emeritus, Benedict retains the style of His Holiness and continues to dress in the papal colour of white. He was succeeded by Francis on 13 March 2013, and he moved into the newly renovated Mater Ecclesiae Monastery for his retirement on 2 May 2013. In his retirement, Benedict XVI has made occasional public appearances alongside Francis.

In addition to his native German language, Benedict has some level of proficiency with French, Italian, English, Latin, and Spanish, and can read Ancient Greek and Biblical Hebrew. He is a member of several scientific academies, such as the French Académie des Sciences Morales et Politiques. He plays the piano and has a preference for Mozart and Bach.

On 4 September 2020, Benedict became the longest-lived person to have held the office of pope, at 93 years, 4 months, 16 days, surpassing Leo XIII, who died in 1903. Provided by Wikipedia
Showing 1 - 20 results of 25 for search 'Benoît XVI', query time: 0.09s Refine Results
Search Tools: Get RSS Feed — Email this Search — Save Search

Search in other universities (SUDOC), ask for an interlibrary loan or submit a purchase request.